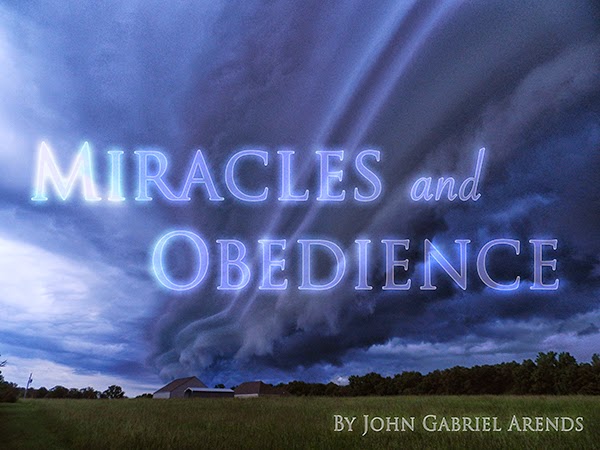 I have a great appreciation for miracles. As a boy about to enter my teen years, I seriously doubted the existence of God. But in a church meeting one day, I witnessed people being healed by the supernatural power of Jesus. I could literally feel that Jesus came into the room. People who were sick or in pain one minute were completely healed a minute later. I knew that Jesus was real, and I decided to follow Him at that time. Over the years, I went on to learn about ministering in the power of Jesus, and I've seen crazy things—the deaf hearing, the blind seeing, the lame walking, and much more. The supernatural things I read in the Bible have become an important part of my life. All of these things have had a tremendous impact on my faith and the faith of others as well. I'm now an ordained pastor with Global Awakening and I've gotten to travel and minister with some of the greatest revival leaders in our day. I love the supernatural works of God, and I might not have given my life over to Jesus if it hadn't been for seeing His power. But in all of this, I have learned something: the atmosphere of miracles doesn't automatically create obedience for God or people who love Him.

In Matthew chapter nine, two blind men were following Jesus, begging Him to do something about their blindness. Jesus did not heal them out on the streets, but instead He waited to speak with them until they were inside. Miraculously, their sight was restored! Then the scripture says, "Jesus warned them sternly, 'See that no one knows about this'" (Matthew 9:30, NIV84). Jesus warned them sternly. He was serious, and they knew it. You would think that out of their awe for who He is and His power—and just out of gratefulness—they would gladly do what He asked. That is not the case, however. "But they went out and spread the news about Him all over that region" (v. 31). Even though He—the worker of miracles—had warned them sternly, they did exactly the opposite. And boy were they excited! They probably thought they were doing Jesus a favor. But whatever it was that they thought, they were disobedient. Even though they experienced the supernatural and heard the audible voice of God, they did what felt better to them.

It has been my observation of the revival movement—of which I am an active part—that although we have miracles, manifestations, the prophetic, signs, and wonders, we often suffer from the same problem as these blind men: we are still disobedient. In the atmosphere of miracles, incredible things are happening. It is exciting! I'm not sure that I've experienced anything more exhilarating then seeing blind eyes get healed. And I love the passionate times of worship that go on in our meetings. But at the end of the day, I have to ask myself, has my excitement about miracles turned into obedience to God? Sometimes when I say I love God, what I really mean is that I am impressed by His the great things He does and I like the way He makes me feel. But Jesus said, "If you love Me, you will obey what I command" (John 14:15). Do I love Him like that?

On another occasion, Jesus made these clear statements:

Not everyone who says to me, "Lord, Lord," will enter the kingdom of heaven, but only the one who does the will of my Father who is in heaven. Many will say to me on that day, "Lord, Lord, did we not prophesy in your name and in your name drive out demons and in your name perform many miracles?" Then I will tell them plainly, "I never knew you. Away from me, you evildoers!" (Matthew 7:22-23)

You see, the presence of the supernatural in our lives or the ability to perform miracles does not automatically mean that you and I actually love God. It's possible to hang out in revival atmospheres all the time but never really get to know the One we say it's all about. So we believe in Jesus—just like the demons do. We think He is awesome—just like the demons do. But do we obey Him?

It's possible to do miracles and still do evil. That is why He called them evildoers! It is possible to be a part of thriving revival/renewal/prophetic/Charismatic/Pentacostal/Kindom/healing/whatever-label-you-want church and still miss the point. (It's possible to be the pastor of a church like that and miss the point. Our goal should never be revival. It should be Jesus.) In the King James Version, it says that Jesus called them, "Ye that work iniquity." That is a scary thought to me. Can we work miracles at church meetings and "iniquity" the rest of the time? In the original Greek, these words mean, "to do business without the law, because of ignorance or contempt." You see, Jesus isn't just interested in giving us warm, fuzzy feelings when we sing worship songs. He is looking for people who keep His law in their hearts at all times. They do business—they do life—with His law in mind. He's looking for people who love Him and who will do what what He says. When Jesus made these statements, He was saying that many people will assume that the amount of spiritual activities in their lives will cover over the fact that, throughout their daily life, they break His commands, either because they are just ignorant or because they do know but still don't care. And He will plainly tell them, "I never knew you."

Christianity without miracles is missing something. Christianity without tangible demonstrations of the Kingdom of God is incomplete. But the miraculous and the atmosphere of the supernatural without obedience is just as bad or worse. I would rather show up in Heaven saying, "I didn't know miracles were available" than to show up and say, "I experienced thousands of miracles but I didn't care to obey You, know You, or love You."

Immediately following these statements, Jesus went on to say:

Why do you call me, "Lord, Lord," and do not do what I say? As for everyone who comes to me and hears my words and puts them into practice, I will show you what they are like. They are like a man building a house, who dug down deep and laid the foundation on rock. When a flood came, the torrent struck that house but could not shake it, because it was well built. But the one who hears my words and does not put them into practice is like a man who built a house on the ground without a foundation. The moment the torrent struck that house, it collapsed and its destruction was complete. (Luke 6:46-49. Also see Matthew 7:24-27.)

In the revival movement, we have got to understand that enjoying miracles and the awesome things God does is no substitute for obeying God! Miracles are a proof of God's love for us; obedience is proof of our love for Him. The context of this parable about the wise and foolish builders is when people thought that just prophesying, doing miracles, driving out demons, and saying "Lord, Lord" meant that they knew God—but they didn't! Fools can walk in supernatural power. A new believer can operate in any gift of the Holy Spirit. But a wise person builds a solid life that grows the fruit of the Spirit.

Miracles and revival are incredible parts of our inheritance as children of God. But many people sitting in revival meetings are about to experience their lives getting shipwrecked. That's a prophetic word by Jesus Himself. For many people, the damage will be beyond repair. They will pay the price in their bodies, their finances, their marriages, and their families. Why? Because they like to sing worship songs, but not live worship lives. They like to listen to powerful messages, but they don't powerfully obey. They like to ride the wave of emotion that comes with renewal, but they don't take the time to dig down deep. They don't want to move the dirt out of their life so they can rest on solid rock. But Jesus also prophesied that there would be some who would hear His words and take them to heart like their lives depend on it. And these people, He said, will be unshakable.

I am not saying in any way that miracles are bad. I love them, and that is how Jesus drew me to Himself. But just like the blind men, it is possible to experience the goodness of God and His power but still choose to disobey. It is time we listen to the voice of the Miracle Worker and obey Him.

I challenge you, if you are reading this, to ask yourself some hard questions. I'm asking them to myself. Do I have a heart to obey? Do I actually love God, or do I just appreciate the benefits of being near Jesus? Am I actively digging down deep so I can have a solid life, or am I content with a shallow life where I am led solely by my emotions?

I pray that, together, we will become people who love the miracles and obey the One who works them. I pray that the miraculous will increase in all of our lives, but I pray that our response to His voice will also increase. I pray that we will choose to dig down deep and live solid lives that terrify the devil and glorify Jesus.

Posted by John Gabriel Arends at 1:21 AM No comments: