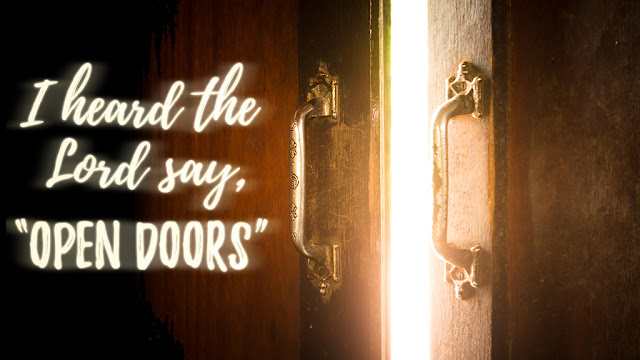 It’s a new year and a new day. This is the time that many people traditionally reflect on where they have been and what might be in the future. It offers us all a chance at a fresh start. In looking toward a new year, we can let go of what is behind and begin to dream again. This year is no different in that regard.

As the people of God, I believe it is important to hear His voice and move with His rhythms. God is not confined to time and space and we know from Isaiah 55 that His ways are not our ways. But, His Kingdom does flow with times and seasons. There are moments in the Kingdom that God ordains for certain purposes. That is why I believe it is essential to tune into what His Spirit is saying to be in sync with what heaven is doing. Like the sons of Issachar, we need to understand the times and know what to do.

Two years ago, as we held our first service in our new building, I heard swords clashing in the spirit. It seemed to be a perfect time for celebrating our move into the space we had worked so hard to restore. But instead, I felt a warning that the enemy was not pleased and would not surrender the war against God’s people simply because we had taken this territory. I wondered at that, but kept it in mind knowing that we can never rest on our laurels. We can never sleep on our watch.

Then last year, as I sought the Lord for what He might say to us as a church I heard the word: “surprises.” That word was full of possibilities and I knew the Lord was speaking to tell His people to expect the unexpected. I knew that He was being gracious to prepare us for the things we would see and experience during 2016. It was the kind of word that allowed us to hold steady and not be moved by anything that happened. How could we have ever known that word would have so many implications, not only for our personal lives, but for our nation and indeed the world? Headlines screamed on November 9th that shocked nearly everyone. There was a huge political upset. Certainly those “in the know” didn’t see it coming. This change in our government will guarantee that the unexpected has already happened and will continue to play out in the future.

Why do I recall God speaking the word about swords clashing and the word about surprises? Because it is important that we recognize that God is on the move and His people need to move with Him. We are living in a profoundly prophetic time! We have entered into the year 5777 on the Jewish calendar. Five is a number that often symbolizes grace. And you probably know that 7 is a number that represents completion or perfection. But in Hebrew the letter “zayin” refers to the number “7” and is also a reference for the word “sword.” Supernaturally, this year speaks of God giving “grace” for victory in the battle of clashing swords.

As I pondered this I originally thought that I had somehow missed the right timing because I received the word about the clashing of swords two years ago. And the word about expecting the unexpected was for last year! But, Holy Spirit has been teaching me that He is not bound by the western calendar or any other man made reference to time. Somehow, I had assumed that a “word” for one year could only apply to that year and that we were to look for another “word.” But, He has been showing me that the word of the Lord is like a river and often flows together with what has already been spoken. His word doesn’t stop just because we flip the page on the calendar.

So, as I sought Him for any new word He might have for us in this new year, I felt Him speaking “open doors.” Honestly, I think it is so important to test what we hear. I had decided that I would not presume that He had a word for us or that I would necessarily hear it. But, as I prayed and spent time in the Scripture, I have felt a confirmation. The first verse I felt impressed by was Isaiah 45:1-3: “Thus says the Lord to Cyrus His anointed, Whom I have taken by the right hand, To subdue nations before him. And to loose the loins of kings; To open doors before him so that gates will not be shut. I will go before you and make the rough places smooth; I will shatter the doors of bronze and cut through their iron bars. I will give you the treasures of darkness And hidden wealth of secret places. So that you may know that it is I, The Lord, the God of Israel, who calls you by your name.” These verses are loaded with promise about what God Himself is about to do. They speak of Him going before us and giving us revelation, from secret places.

Another significant confirmation came from Revelation chapter 4. John is speaking about what he experienced on the island of Patmos. “After these things I looked, and behold, a door standing open in heaven, and the first voice which I had heard, like the sound of a trumpet speaking with me, said, 'Come up here, and I will show you what must take place after these things.'” I felt the Lord impressing me that those who are looking will see a door open in heaven. I wish time and space would allow me to unwrap all that I have discovered in this prophetic chapter. The open door referred to here is one that allows the beholder to see the Lord Himself in His glory and to experience a bit of the activity of heaven. I believe that the word “open doors” is a reference to the opportunity to receive revelation this year unlike any time before. I also believe it is a time that we can “immediately be in the spirit ” (verse 2) And it is an opportunity to join with the hosts of heaven in new levels of worship that go beyond anything we have experienced before. This chapter speaks of the elders falling down before Him and the living creatures who never cease to say, “Holy, holy, holy is the Lord God Almighty…”

There is so much more, but I believe God is offering us an invitation to experience open doors of opportunity in this next season, open doors of revelation and worship which in turn will release grace to wield the sword. Beloved, be assured that there will be warfare as the enemy recognizes that time is running out for him, but victory will be ours if we position ourselves to hear God’s voice and to move with Him. He is beckoning us to “come up!”