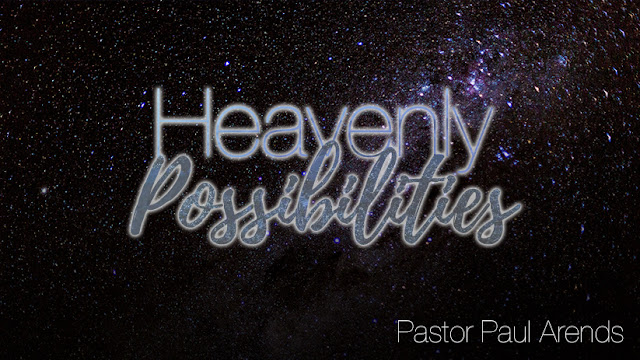 If your heart has been awakened to God's love and activity in your life, the Christmas season—and the story behind it—can capture your attention afresh each year with new expectations of blessing and breakthrough. All of us need a fresh dose of hope because we all need breakthroughs and blessings that take us beyond where we are living right now.

When I read the accounts written in the Gospels of Matthew and Luke of how our Heavenly Father sent His Son into the earth wrapped in human flesh and the incomprehensible way He did it (angelic visitations, supernatural conception, a star appearing, etc), my imagination gets stirred for my present circumstances of life. Heavenly possibilities begin to overlay what I thought were limiting earthly realities. This is where, with Holy Spirit, we can dare to dream and embrace the "what if's" of God. And such dreaming and pondering has been known to lead to believing that you can receive what you had never previously imagined. As Jesus said, the Kingdom of Heaven is "at hand."

While Matthew's account kicks in with Joseph and Mary as the central story, Luke begins with the "story behind the story." And this is where I want to begin my Christmas journey this year. In Luke 1, we are introduced to a couple, Zacharias and Elizabeth, relatives of Mary. We read that when God began to open up heavenly possibilities ("what if....?") into their lives, they were already in the grip of "hope deferred," "dreams have died," "just surviving," disappointment and shame. All they had wanted in life was to have a son who would carry on the family name and priestly ministry of the father. They had served God faithfully according to all His commands, especially the ones that carried promises of blessing. But the fulfillment of the promise of the blessing of children was beyond them, for they were now too old in body and Elizabeth's continued barrenness had become deadness.

Just like you and I, they had no idea that their dream was too small and that their Father, who had regard for their faith and obedience, had kept in reserve something greater than they thought was available. It is not that He had no regard for their pain or disappointment (hope deferred makes the heart sick), He just had a more glorious outcome to overlay onto their impossibilities that carried a joy in fulfillment beyond their imagination. And the heavenly Kingdom assignment for their son required a more than ordinary birth to provoke the hearts of all who heard of it that something marvelous was about to break into the earth and change history forever. "Fear came on all those living around them; and all these matter were being talked about in all the hill country of Judea. All who heard them kept them in mind, saying, 'What then will this child turn out to be?' For the hand of the Lord was certainly with him" (Luke 1:65-66, NASB).

Ponder with me: What if my present "hope deferred" and the limitations/impossibilities that seem to dictate my future are only the stage God has set for His glorious entrance into my life circumstances to unfold His glorious plan that was far greater than I could have imagined? Is there reserved in heaven for me right now a blessing, a breakthrough, a fulfillment that will blow my mind when it comes to pass in His prearranged time? And would you welcome an extraordinary, unexplainable miracle breakthrough to shake things up around you? Here is the pathway to receive it, found in the words of Elizabeth herself after she became pregnant: "Blessed is she who believed that there would be a fulfillment of what had been spoken to her by the Lord" (v. 45).

Dare to dream again with God this Christmas. Your ponderings and prayers could attract some angels to your impossibilities, which could lead to something marvelous!
Posted by John Gabriel Arends at 8:18 PM